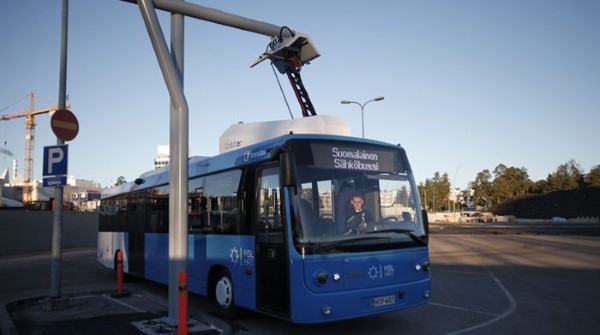 The buses, which are the first fast-charging electric buses in Finland, are manufactured by Linkker using drivetrains from Visedo. During operation the electric buses produce no emissions and use significantly less energy than their diesel equivalents.

Tests demonstrated that the Visedo-powered e-buses consume less than 0.7 kWh per kilometer. This also makes them much more cost-effective as well as requiring less maintenance and offering longer lifespans than diesel buses.

“It’s really exciting to see our technology in action so close to home. I can’t wait to ride one of the new e-buses to our office in Helsinki,” said Visedo CEO Kimmo Rauma.

“Converting to electric buses will not only reduce emissions and tackle air pollution in the capital, but it’s a great chance for people to experience the benefits of electric-powered transport in their everyday lives.”

The Helsinki Regional Transport Authority’s (HSL) is committed to increasing the use of low-emissions vehicles and plans to power a third of its fleet with electricity by 2025. It’s a vision strongly supported by the Mayor of Helsinki Jussi Pajunen. “The ambitious goal of an electric bus fleet is vital for implementing Helsinki’s vision on carbon neutral future”, he said.

Speaking to Finland’s national broadcaster Yle, Helsinki bus driver Aino-Maija Nurmiainen said she could feel the difference in her fingertips: “The new buses make it so much easier to drive smoothly than hybrid cars do. The passengers will probably notice how quiet the ride is.”

Visedo’s technology is powering the transition to electric buses across the globe. Projects are already underway with Hybricon Bus Systems in Sweden and new announcements in the Chinese, Asian and South-East Asian market are expected in coming months. China in particular is seen as a growing electric bus market with the country’s central government looking to electric buses to reduce pollution in its large cities.

Visedo also manufactures electric drivetrains for public transport in the marine sector. The company’s technology will deliver power for the European Union’s project to build the world’s largest electric ferry as well as other electric passenger vessels in Europe and Asia. Already shaping up to be a game-changer for the shipping industry, the EU’s ambitious E-Ferry is one of the top five projects within the EU’s Horizon 2020 initiative.

Anyone who wants to ride Finland’s first e-buses can hop on a service on line 23 from the Central Railway Station to Ruskeasuo from today.