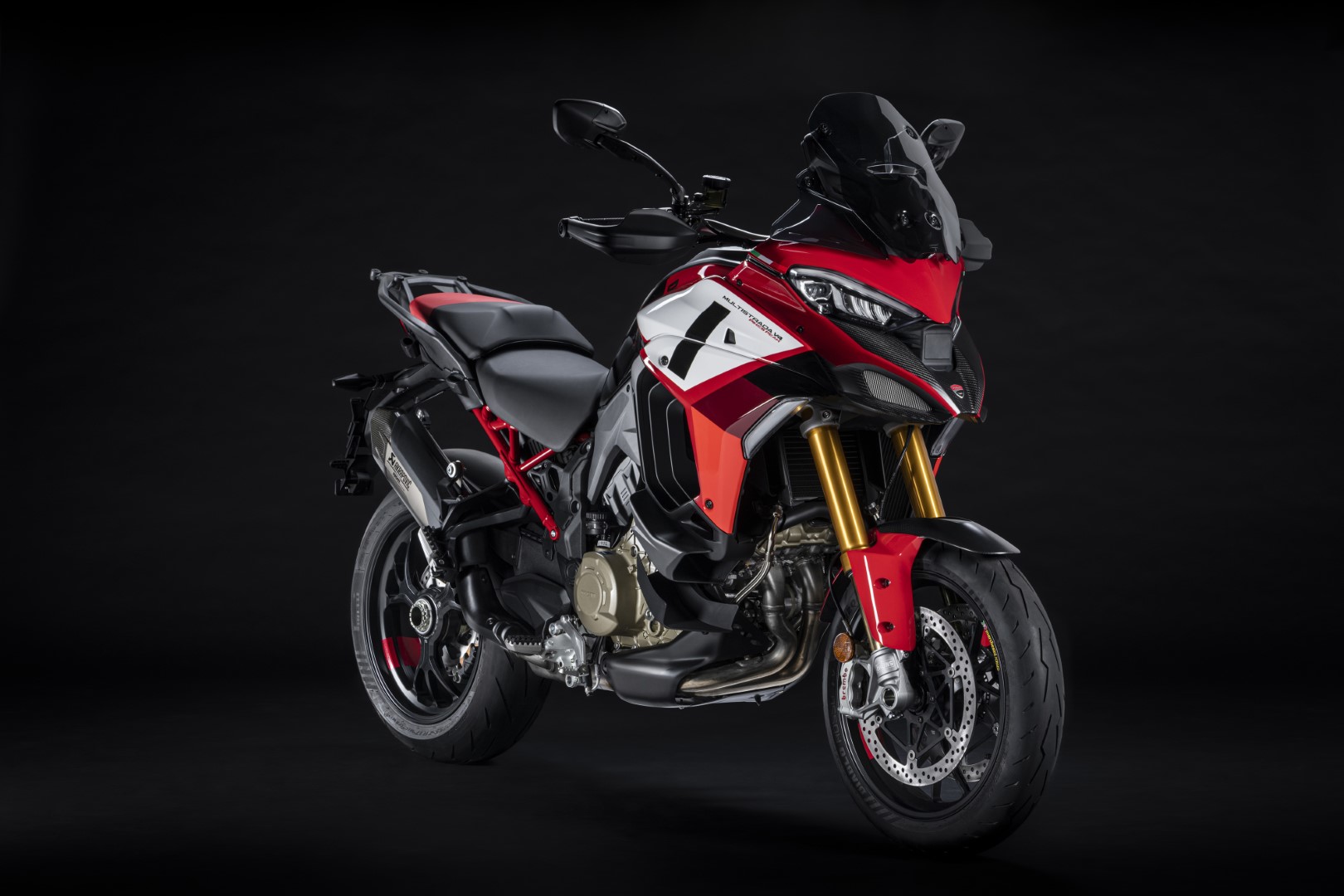 According to Ducati, the Mulistrada V4 Pikes Peak was developed by introducing significant changes in terms of chassis set-up, premium ergonomics, electronic controls as well as numerous dedicated components, which give the bike a distinctly sportier attitude compared to the Multistrada V4.

Setting the Multistrada V4 Pikes Peak from the rest of the range in terms of aestthetics are features like the 17” front wheel, the single-sided swingarm,  and the dedicated “Pikes Peak” livery inspired by that of the Desmosedici GP ’21.

With the aim to further emphasise its sporty-oriented attitude, the new Multistrada V4 Pikes Peak comes with a wide range of components made of carbon fibre in addition to the Akrapovič titanium and carbon silencer (road-approved).

The new machine is fitted with sports road tyres and mounts, and Marchesini forged aluminum rims that are 2.7 kg lighter than those of the Multistrada V4 S.

Additionally, Öhlins Smart EC 2.0 suspension also guarantees brilliant performance in sports riding, through the use of an “event based” mode, the same adopted by the Panigale V4 S and the Streetfighter V4 S.

The aluminum monocoque frame has been refreshed with the precise objective of achieving a different inclination of the steering head (25.75° compared to the 24.5° of the Multistrada V4), not to mention that trail and wheelbase geometry have been recalibrated according to the different uses of the motorcycle.

The braking system of the new V4 Pikes Peak is at the top of the segment and derives directly from that of the Panigale V4.

At the front, the system includes 330 mm diameter discs and Brembo Stylema monobloc calipers, like the Multistrada V4 S, to which are added the pads of the Panigale V4. At the rear, the system features a single 265 mm diameter disc with a Brembo floating caliper.

The riding position has also been completely refreshed – the footpegs, for example, are higher and moved back to increase the maximum lean angle, while the handlebar is lower, narrower and has contained curved bars.

The final result is that the rider benefits of an even better feeling in sporty riding while maintaining an excellent level of comfort.

The new Ducati Multistrada V4 Pikes Peak is powered by the most powerful engine within the category, the V4 Granturismo, achieving 170 hp and 125 Nm at 8,750 rpm.

The Multistrada V4 Pikes Peak inherits the latest generation and sophisticated electronic package of the Multistrada V4 S, which includes, among others, the as-standard radar technology both at the front and at the rear, which offers Adaptive Cruise Control (ACC) and Blind Spot Detection (BSD) functionality.

The 6.5” TFT dashboard, also available as standard on the Multistrada V4 Pikes Peak, allows the user to view the map navigator thanks to the advanced Ducati Connect system, which allows to mirror the rider’s smartphone.

Electronics innovations are, also in this case, aimed at obtaining a better sporty driving experience. In addition to the introduction of the Race Riding Mode, Ducati Wheelie Control on the Multistrada V4 Pikes Peak has an updated strategy that offers an even better response and a more accurate control during dynamic riding.

ABS Cornering has also been configured to be safe and performing in whatever riding situation, even in the sportiest.