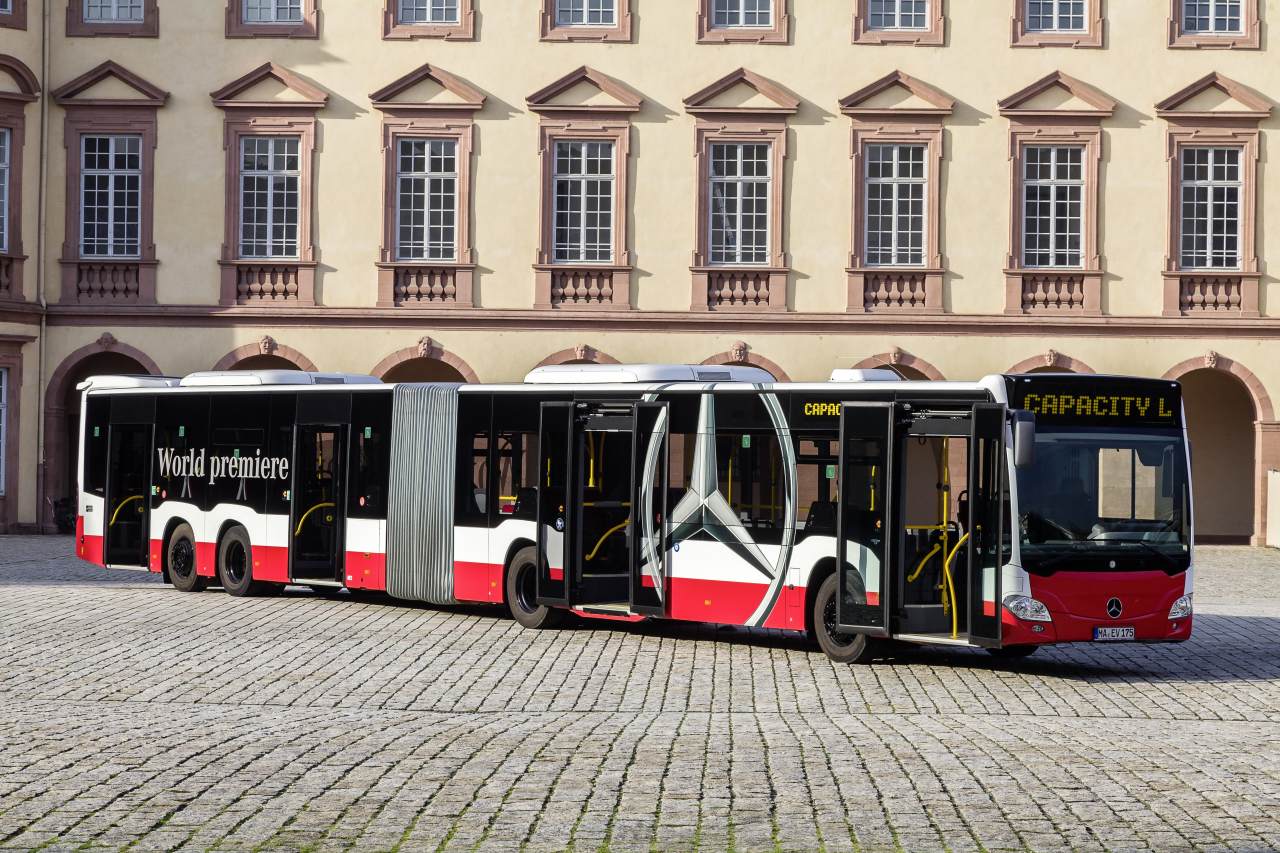 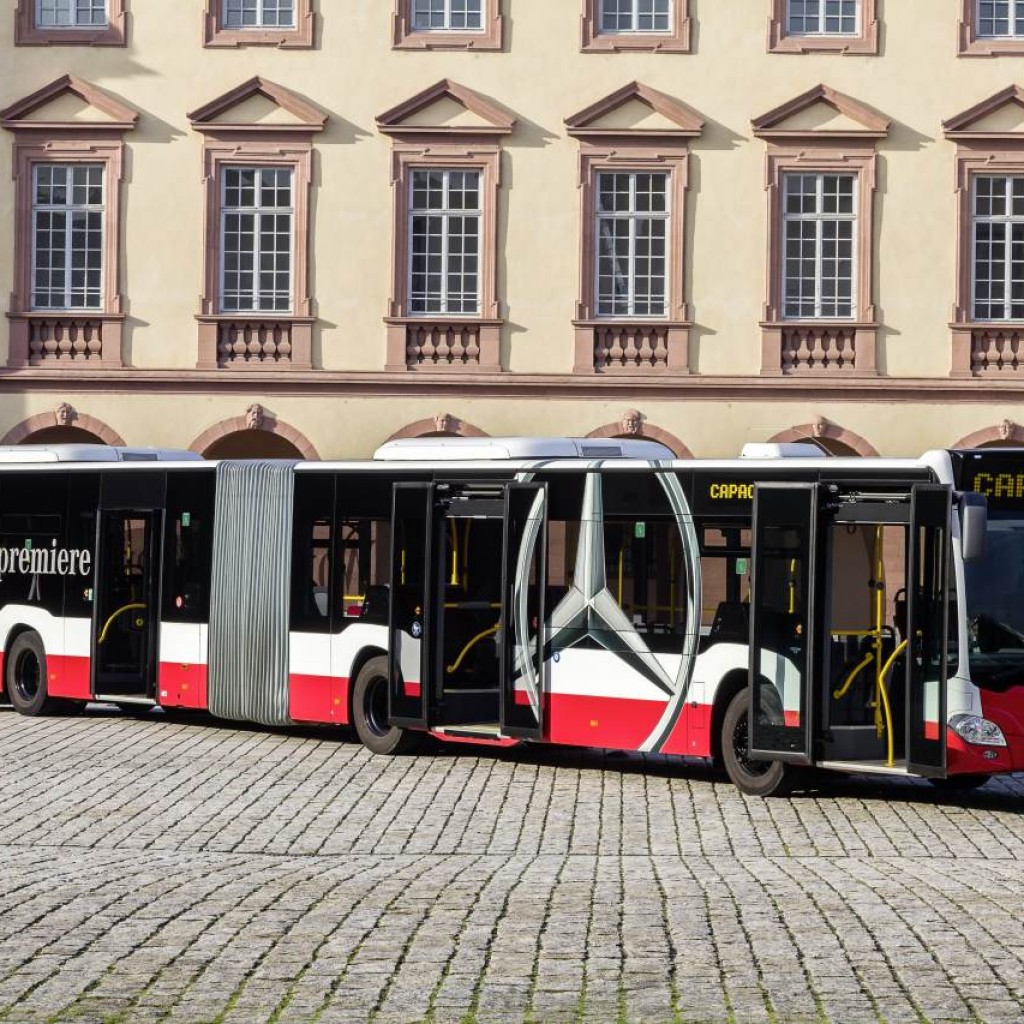 The UITP Congress, which is the world congress for transport operators, will be taking place in Milan from the 8th to 10th of June, and Daimler is all set to  present itself as a full-line provider of mobility, offering cities and businesses tailor-made solutions to transport problems such as:

The new CapaCity L: the longest Mercedes-Benz of all

The new Mercedes-Benz CapaCity L is a further solution to the high density of traffic in cities. The longest complete Mercedes-Benz of all has a length of 21 metres and can carry up to 191 passengers. This XXL bus is therefore able to replace around 50 passenger cars on the roads, relieving urban traffic congestion. The new large-capacity bus is not only enormous in size, but also enormously cost-effective and environmentally friendly: when filled to capacity it consumes less than 0.5 litres of diesel fuel per 100 kilometres per passenger. Which probably makes it the world’s most economical diesel powered bus.

The new CapaCity L has arrived at just the right time: passenger numbers using urban public transport are increasing worldwide. The UITP (Union internationale des Transports Public) estimates an increase of around ten percent in the EU since 2000, a trend which is continuing to rise. On average, every city-dweller in the EU makes use of public transport 132 times per year.

The CapaCity L is the ideal bus for BRT systems. BRT stands for Bus Rapid Transit, i.e. fast bus transport systems. BRT systems use their own lanes and are much faster, less expensive and more flexibly usable than rail systems. Daimler has an in-house department supporting the introduction of BRT systems. Its experts are in action worldwide, and involved in transport systems in Rio de Janeiro, Johannesburg, Strasbourg and Istanbul, for example. At present their focus in on Japan, where they wish to resolve the transport problems accompanying the 2020 Olympic Games in Tokyo.

Citaro E-CELL and F-CELL
The Mercedes-Benz Citaro is the world’s best-selling city bus: almost 45,000 Citaro models are on the roads in Europe’s major cities and beyond. At present the Citaro is powered by a clean and highly economical diesel engine meeting the stringent Euro VI emissions standard. This is now being joined by another: the UITP Congress will see the world premiere of a new natural gas engine for the city bus. It is significantly quieter than the already quiet diesel engines. Moreover, its CO2 emissions are more than 20 percent lower compared with the diesel equivalent.

Daimler is also looking into the near future: before the end of the decade, the Citaro E-CELL with battery-electric drive and the Citaro F-CELL with fuel cell drive will enter series production. The forecast: in 2030, 70 percent of all newly acquired Citaros will be locally emission-free with electric drive.

The Citaro E-CELL and F-CELL will be based on a modular e-platform. This allows tailor-made electric mobility for individual cities and even for each bus route: the battery capacity and charging technology are suited to the individual requirements.

At the same time Daimler is concertedly driving the further development of the diesel engine: new fuel-saving technologies such as a compact hybrid are set to achieve a further reduction in fuel consumption and therefore CO2 emissions by around ten percent.

Moovel
With the moovel platform Daimler is changing into a mobility provider. moovel is an app which compares all the available means of transport with each other in terms of travel time and cost after the destination is entered: public transport, car and bike sharing, taxi or lift sharing. Both for inhabitants and visitors to a city or region: moovel knows the best way from A to B.

And moovel can do even more: using the flexible car2go mobility scheme, customers can rent a smart car spontaneously at any time and at the end of their journey park it anywhere within the relevant designated area. Customers locate the vehicles using their smartphone or computer and only pay for the hire time which is calculated by the minute.