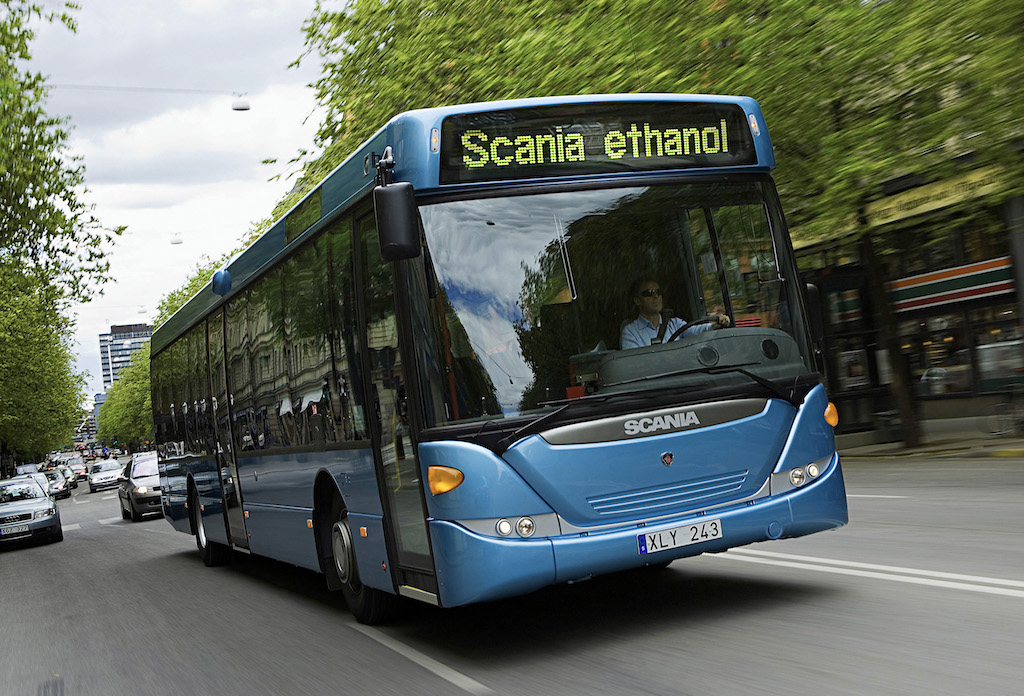 The United States exported more than 1 billion gallons (68,000 barrels per day) of fuel ethanol in 2016, an increase of 26% from export levels in 2015. U.S. imports of ethanol, which are relatively much smaller, decreased by 60% to 36 million gallons in 2016. The United States remained a net exporter of fuel ethanol for the seventh consecutive year, exporting ethanol to 34 different countries, with Asian and South American markets receiving the highest volumes.

In the United States, ethanol is primarily used as a blending component in the production of motor gasoline and mainly blended in volumes up to 10% ethanol, also known as E10. Corn is the primary feedstock of ethanol in the United States, and large corn harvests have contributed to increased ethanol production in recent years. The U.S. Department of Agriculture estimates that the United States produced a record 15.1 billion bushels of corn in the 2016–17 harvest year, 11% more than the 2015–16 harvest. 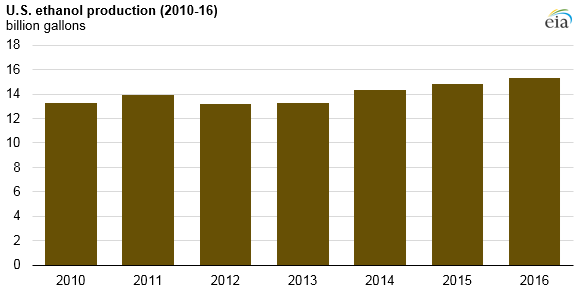 U.S. ethanol production reached a record level of 15 billion gallons in 2016 (equivalent to about 1 million barrels per day). Volumes of domestic production beyond those used in U.S. ethanol blending were exported in 2016, mainly to countries with ethanol mandates and those that use ethanol to increase octane levels.

Brazil surpassed Canada as the top destination for U.S. fuel ethanol exports, receiving 267 million gallons in 2016. Brazil is one of the world’s largest producers and consumers of fuel ethanol, but unlike the United States, Brazil’s main ethanol feedstock is sugarcane. Relatively high global sugar prices during 2016 encouraged more sugar production over sugarcane ethanol production. Corn ethanol exports to Brazil were further encouraged by Brazil’s 27% fuel ethanol mandate and its zero import tariff for ethanol, which will remain in place through the end of 2021.

China, the third-highest export destination, received 179 million gallons of U.S. fuel ethanol in 2016, as U.S. ethanol remained an attractive option for meeting Chinese ethanol blending mandates. Exports from the United States to China were especially attractive during 2016 because of a temporary reduction of the Chinese tariff on ethanol. The tariff was reduced from 30% to 5% during 2016, but returned to 30% at the start of 2017.

U.S. ethanol imports fell 60% in 2016 to 36 million gallons, the lowest level since 2010. Imports were almost exclusively (99%) sugarcane ethanol from Brazil. Most of the imported ethanol went to the West Coast region, most likely for compliance with California’s Low Carbon Fuel Standard (LCFS) Program, which uses scoring rules that count sugarcane ethanol as a fuel with a much lower carbon content than corn ethanol.