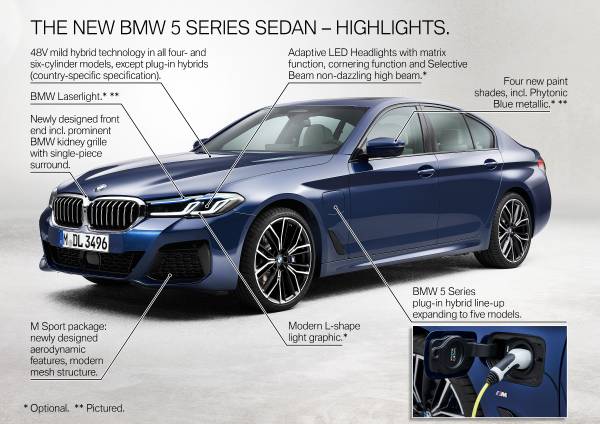 Shortly after beginning the registration of interest for the iX electric SUV, BMW Group Malaysia has started doing the same for another highly anticipated model which could be launched at the same time – the 2021 BMW 5 Series facelift.

Those of you who follow BMW Malaysia on Facebook and Instagram would’ve noticed posts paying tribute to all the 5 Series models from the past, followed by a link for those who want to get their hands on the new 5 Series to register their interest.

After paying a visit to the BMW Shop, we noticed that two variants are listed – the 530e M Sport, and the 530i M Sport. Unfortunately, there is no Luxury Line variant for now.

On the exterior, the 5-Series looks significantly sportier and more youthful than the pre-facelift model which we have on our roads now. Up front, the lights, the kidney grille, as well as the bumper have all been redesigned, looking a lot like the 3-Series.

Besides that, the 3D-ish LED taillights, the rear bumper, the trapezoidal twin exhaust tips, red M Sport brake calipers, as well as the wheel design (18-20 inches) are all new as far as the car’s exterior is concerned.

Another big news is that a mild-hybrid system comprising a 48V starter-generator, will be rolled out in all models with a four- or six-cylinder engine, adding 11 PS to the total output figures. However, whether the new starter generator will be offered here remains unknown as no technical details have been revealed yet for our market.

Even if the existing powertrain package of the 530e gets carried over, it still packs a lot of punch – delivering 252 PS and 420 Nm of torque, enabling the car to sprint from naught to 100 km/h in about 6 seconds.

But if the new mild hybrid system with XtraBoost function makes its debut, expect the 530e M Sport to kick out a maximum of 292 PS and 420 Nm, which makes the sedan even more potent than it is now.

Price wise, the 5 Series is expected to be priced similar to what we have now – between RM338,800 for the 530e M Sport and RM382,800 for the 530i M Sport (Recommended Retail Price with Extended Warranty & Service Package, without SST exemption).